A few weeks ago I was approached by the Cultural Infusion Committee (David Lawrence, President and CEO of the Arts Council of Indianapolis; Keira Amstutz, President and CEO of Indiana Humanities; and Melissa Caito of the Indiana Sports Corporation) asking for a proposal for an installation for the NCAA Final Four Tournament to be held in Indy the first weekend of April. There is a train bridge downtown on Capitol Ave that runs between the Lucas Oil Stadium where the games will be held and Georgia Street where events will be happening. During the tournament weekend they expect about 70,000 people downtown in that area. Most will walk under the 360′ long train overpass to get to Lucas Oil. So the NCAA wanted something done about the rather unsightly space and asked the Cultural Infusion Committee to solicit a solution. David thought of my From Now On video-mapping installation that was at the Arts Council’s Gallery 924 a couple of years ago, and sent me an email. Normally I would want to imagine and propose a video-mapping installation, but a high tech solution was simply out of the question due to the nature of the environment, time, money, projection logistics, etc. In addition to being low-tech, two other things were important to me: that it was kinetic and that it was immersive. So I proposed turning the space into an immersive disco environment. Hanging and lighting 351 disco balls (approximately basketball-size) under the bridge, and hiring a DJ to bring on the music would turn it from an unsightly space into a destination space. There are 351 NCAA Division 1 colleges, hence the number derivation. Who has ever stood under 100s of disco balls? I haven’t. I am not even sure what exactly that will be like, but I do know it will be impressive. It has to be. Being impressive, creating something that exceeds expectations, is another requirement of mine. The committee jumped on this idea right away. And I went from knowing I had no time to be involved in yet another project to being fully onboard. As of this writing (3/20) we are two weeks out from the event. Today came word from the IMPD that we won’t be able to hang the balls over the traffic lanes. Ouch. So it just went from imagining that huge space under the bridge covered with balls to being only above the sidewalks. This is where vision meets up with the reality of logistics. We knew some of the lanes would be closed to traffic and therefore I was hoping the balls could hang over some of the traffic lanes. But the closure apparently isn’t complete the whole time, so we can’t have anything that might hit tall trucks. So the balls will just be over the sidewalks. Luckily the sidewalks are about 15′ wide. Actually it makes it a little more manageable truth be told, because all those balls need to be lit. I have located a supplier in Chicago for as many disco balls as we need and they can be delivered in 3 days. That actually was a shocker to me. I am still amazed that with one call I found a place with hundreds in stock. FYI an 8″ mirrored disco ball can be had for $10.70 (when ordering bulk) with free delivery from Windycitynovelties.com. What exactly we are going to do with 100s of disco balls after the event is anyone’s guess at this point. I say let’s save them for when the Super Bowl comes back and do it all over again! But then again the NCAA owns them. I have solved the perplexing issue of how to attach the balls to the trusses with Chelsea Van der Meer’s brilliant suggestion to use super magnets. There is no natural place in the structure of the bridge where anything can be hooked up high. So how to devise an extremely quick and reliable hanging mechanism had been pre-occupying me for two weeks. Chelsea provided the answer in under 1 minute! Then, thanks to Mike Lulgjuraj, I found that you can get 100 20mm x 2mm circular rare earth magnets from DX.com for $36. The plan is to tie the balls to washers ahead of time, because the magnets won’t arrive from China until right before installation. Fingers crossed. On the day of installation we place a magnet on the truss, slap the washer to that, some extra sticky duct tape on top of that and I think the balls will be incredibly secure. They are pretty light. Several students of mine have already offered to volunteer to help with the installation. Lighting and power are two remaining issues that have to be dealt with. We need to get the street lights that are under the bridge turned off or all of this will be a complete bust. It simply won’t work with the bright sodium vapor lights that fill that space. We also have to figure out where to attach the theatrical lights that will be lighting the balls and where they will be getting their power… and who will provide those lights… and who will be installing them. Once we figure out those details and we actually order the balls/magnets I will start to feel like this is all going to come together.

The days are flying by. The balls arrived on Wednesday and today I picked them up at the NCAA warehouse and brought them to my studio. Tomorrow afternoon with help from volunteers we will string them. I have had discussions and meetings all week. We got IPL to agree to disconnect the lights under the bridge. We got scissors lifts and a giant generator arranged. We got a lighting/rigging guy who is going to rig 12 lights per sidewalk. And we’ve got DJ Kyle Long lined up for the weekend. So things are falling into place rather rapidly. I will feel more relieved once all the balls are strung and we can set our sights on Thursday’s installation. I sure hope Thursday is a lot warmer than today. Otherwise installation day is going to be terrible. 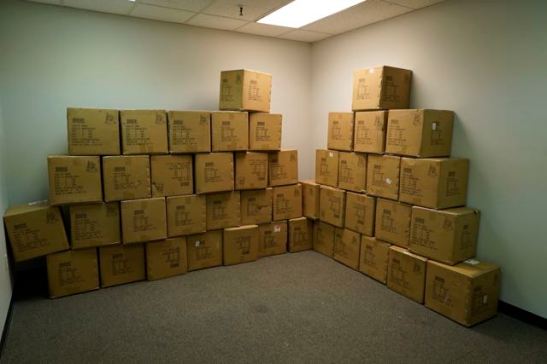 I had a bunch of volunteers show up to my studio to help string the balls. It took us only 2 hours and 45 minutes to tie on fishing line and tie a washer to the other end. So the first task was successfully completed. but of course the real test comes on Thursday.

The six days involved with installing, running and de-installing this piece were some seriously exhausting days. Days later, I have just finally fully recovered. Thursday was an intense day and a very late night of hanging everything (special thanks to my volunteering students Ross Beckman, Sheheryar, Jaichi Lui, Samantha George, and Nathan Cripe, without whom this wouldn’t not have been completed.) The day was made more complicated by the fact that the sidewalk cleaning crew I had requested 2 weeks earlier, showed up right when I did in the morning and proceeded to power wash the filthy sidewalk. While the sidewalk needed it desperately, as the water evaporated its condensed on the girders under the bridge making our job pretty wet. 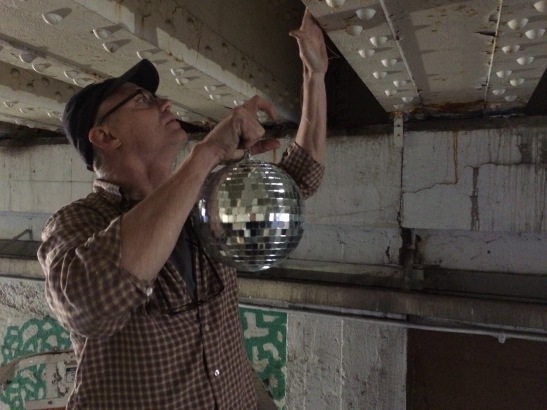 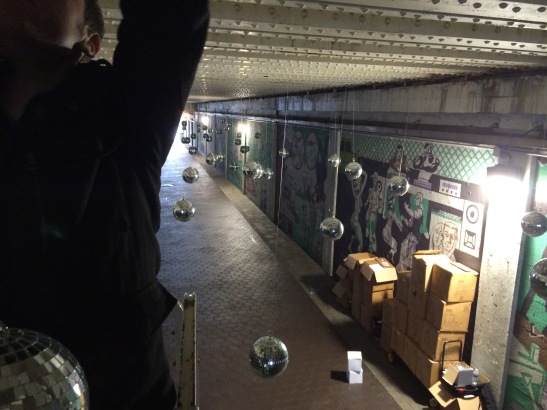 Once everything was installed I got to enjoy hanging out with DJs Kyle Long and Eric Salazar who played at various high pedestrian times during the long weekend. As a consequence I have disco on the brain in a seriously way.

Unfortunately after the first couple of days Homeland Security turned the tunnel lights back on. For public safety reasons they weren’t onboard with my low-light disco environment. Unfortunately that completely ruined the vibe you can see in the picture above. But when 60,000 people came flooding out of Locus Oil and into the tunnel, I could see their point. I wish there were a way that the tunnel lights could have been off as people went into the stadium and then turned back on after the game. The problem is that access to that power switch is located under the street.

Despite the stress of fearing that a disco balls would come down on someone’s head, I really enjoyed transforming that environment and seeing people really marvel at it as they also enjoyed the music. People’s reactions were beyond anything I expected. I received SO MANY compliments. I especially enjoyed hearing what people would say to one another.

Unexpectedly I was offered the disco balls. So now I have over 300 disco balls in my studio looking for their next venue.

Julia Muney Moore, Director of Public Art, who was my point person at the Art Council. She handled all the nitty gritty business so I didn’t have to be distracted by it. Without her help this simply would not have happened.

This entry was posted on March 23, 2015 by arcanumresearch in Art, Final Four and tagged Cultural Infusion Committee, Indiana Sports Corporation.