This is the big week of the Heartland Film Festival here in Indianapolis. (http://heartlandfilm.org/festival/) I have been involved with Heartland as a juror for the last three years. In 2012-13 I was both a narrative feature juror and high school competition juror. This past year, since I was biking across the country with my daughter, (http://grannygear.tumblr.com) I unfortunately only had time to jury the high school competition. Being a juror at Heartland is such a privilege and an honor. And I have really enjoyed both being able to watch all the narrative films in competition as well as debating, sometimes arguing, with the other jurors when it comes time to rank our order. Plus having already seen the vast majority of the narrative films prior to the festival (not all narrative films are in competition), I can concentrate on seeing shorts and docs during the actual fest. This year however I took more trips to the theater to see those narrative features I didn’t jury.

This year’s high school films were incredible. It seems to me they were the best selection I have seen in my time was a juror. It is great to see students in high school capable of making such thoughtful and compelling work. This year’s winner was a film called Chris. It was the very last film I screened and when I started watching it I thought “oh no, this is going to be a conventional high school melodramatic yawn.” But the acting was really good and the shooting was really good. And then the end had such an amazing twist that I just did not see coming. Wow! I love it when films do that. The classic idea of the inevitable yet surprising. It instantly shot to the top of my list. I was happy that most of the other jurors agreed.

This year was notable because a film made by two of my students got into the festival. Matt Spear and Selena Hubbard’s film Three Months was selected as part of the Indiana Spotlight program.

They created this film as capstone students of mine. (My school calls the undergraduate thesis project a capstone.) It was such a delight seeing their film screen and seeing them go up afterwards for the Q&A. I get such great satisfaction as a teacher in seeing my students succeed like that. What a great accomplishment! Congratulations Matt and Selena! 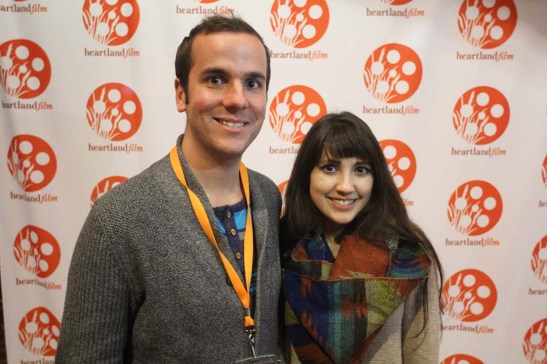 I always try to spend as much time as possible in the theater during the festival. Luckily Heartland happened to align with IUPUI’s fall break this year (Monday and Tuesday off) so I just spent four consecutive days living in darkened theaters. And I have managed to catch a few more screenings later in the week. I have seen some really great films including: Shiddarth, Marmoto, Honest Liar, Light Fly Fly High, Jesus Town USA, The Ballad of Shovels and Rope, Happiness and We are the Giant. The last film, an incredible documentary, completely floored me with the unbelievable courage of those in the film. It is the only film I saw that literally gave me chills. It is about people standing  up to regimes in Libya, Syrian and Bahrain. While this film is full of heart-wrenching footage and unbelievable displays of courage standing up to oppression, I was particularly moved by Zainab AlKhawaja and her sister Maryam, peaceful protestors in Bahrain, who have been jailed many times and were jailed again after the interviews for the film. They displayed such unfathomable courage in the face of oppression. People like this move me beyond the words I have to express. They literally dedicate their lives to protesting against brutal and seemingly insurmountable regimes. Sadly the film mentions at the end that Zainab hasn’t been heard from in over a year. This is really a not-to-be-missed film. (http://wearethegiant.com) I am glad to see such an activist film screen in conservative Indiana. Thumbs up to Heartland for another great year. Keep bringing awesome films to the Midwest.

This entry was posted on October 26, 2014 by arcanumresearch in Uncategorized and tagged Heartland Film Festival, Matt Spear, Selena Hubbard.